Entropion is the term used for an eyelid which is turning inwards, such that the eyelashes rub against the surface of the eye. This condition can occur in the upper eyelids, but is much commoner in the lower eyelids.

Although entropion can rarely be present in babies, it is most often a condition of people over the age of 60 years old. A frequent cause is laxity of the eyelid tissues, sometimes with spasm of the eyelid muscles. Less common causes of entropion include conditions which result in scarring of the inner lining of the eyelid such as chemical or thermal injury, significant allergy and inflammatory diseases like ocular pemphigoid.

Whatever the cause the symptoms can include: 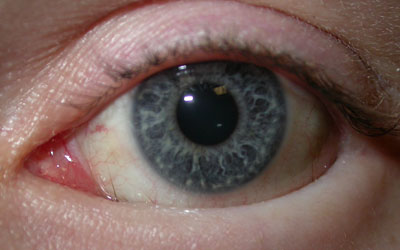 The best treatment is almost always an operation but there are some measures which can be taken to help in the short term whilst waiting to be properly assessed. Using an ocular lubricant (thick artificial tear gel or ointment) may reduce discomfort from the rubbing eyelashes. Tape can sometimes be useful to pull a rotated lower eyelid away from the eye surface. Botulinum Toxin type A can be an effective method of temporarily correcting an entropion, but the effect would only usually last a few months before wearing off. Rarely soft contact lenses can act as a bandage to protect the cornea whilst waiting for a corrective procedure to be performed.

There are numerous surgical options available depending on the cause and the extent of the entropion. Most commonly the eyelid tissues require tightening and the eyelid margin is rotated using sutures (stitches) back to a normal position. The success rate of surgical correction is high and the vast majority of cases can be performed under local anaesthetic, usually as an out-patient. More complicated procedures may require day case surgery using sedation or even a general anaesthetic.

Same patient with entropion corrected using tape (as a temporary measure) whilst waiting to have surgery.